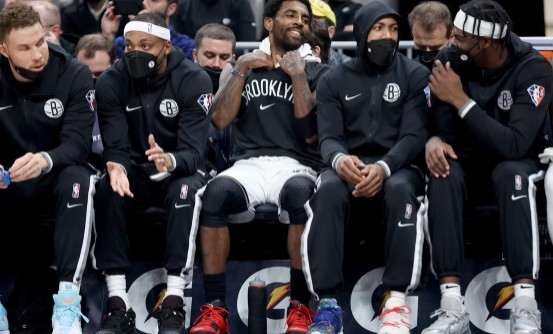 There is a way for Kyrie Irving to play at home, and the Nets should take full advantage of it.

The Brooklyn Nets’ actions are ludicrous.

Their group was severely harmed when the Omicron wave swept over America in December. It was so badly struck that they decided to take the obvious step of bringing in an unvaccinated player, Kyrie Irving, into the mix.

He isn’t the first player in professional sports who isn’t immunized, but his circumstance is unique. Non-vaccinated residents are not permitted to participate in indoor activities such as a professional basketball game, according to the «Key to NYC» executive order.

The Nets made the wise decision not to play Irving at all this season due to the law, despite the fact that he could have played in away games. However, after a COVID epidemic in December, they changed their minds and let Irving become one of the most unusual part-time employees you’ll ever see.

The Nets, on the other hand, may not have to keep up with this farce. According to Stefan Bondy of the New York Daily News, the punishment for breaking these guidelines is a progressive penalty that starts at $1,000 and rises to $5,000 for each incident.

For instance, during the late 1990s and early 2000s, the Kings of Comedy tour was fined $7,500 for smoking cigars inside stadia. What did they do in response? They paid the fine ahead of time for each performance.

The Nets might as well follow suit. Kyrie Irving and the Brooklyn Nets have a lot more money than Steve Harvey, D.L. Hughley, Cedric the Entertainer, and the late Bernie Mac did at the turn of the century. COVID is certainly more serious than smoking cigars in the locker room, but the Nets have already put the most vulnerable members on the squad at risk by allowing him to play at all.

Every day workers, from players to security, are the people most in danger of getting something from Irving. They’re in the locker room, on the plane and bus, and at the practice site, to name a few places. «Key to NYC» did not even prohibit Irving from entering the Brooklyn Nets practice facility. Because the cat is out of the bag, just pay the fine, or make him pay it, and put him in front of the judge.

According to ESPN’s Adrian Wojnarowski, the NBA sent out a memo in September stating that local rules must be followed and that players who do not comply will not be allowed to participate. The Nets and Irving, on the other hand, would be following the rules if they paid the penalties. Irving isn’t going to be denied entry to Barclays Center by the NYPD. This is nothing more than a parking ticket. If the area is not a tow zone, you are free to park wherever you wish as long as you pay the fine on time.

We’ve been harsh on Irving for refusing to get the vaccine, and rightly so. Getting a COVID vaccine and booster is the smart thing to do. One illustration of how this planet is a hellscape is that there is a medicine that has been approved by health organizations all over the world to battle a once-in-a-generation pandemic and that medicine has turned into a political issue.

By permitting an unvaccinated Irving to play on a team that was in the midst of a COVID outbreak, the Nets had already demonstrated their feelings about setting an example for COVID prudence.

Irving’s contributions on the court have already begun to pay off. The Chicago Bulls are the No. 1 overall seed in the Eastern Conference, and the Nets thrashed the Bulls 138-112 on national television on Wednesday night with Irving on the court.

Of course, paying a fine to allow Irving to play would be a bad look for the Nets and the NBA, but it can’t seem any worse than it already does. If Irving is permitted to play for the Brooklyn Nets at all, it’s best for everyone concerned if he does so all of the time.

Be the first to comment on "There is a way for Kyrie Irving to play at home, and the Nets should take…"