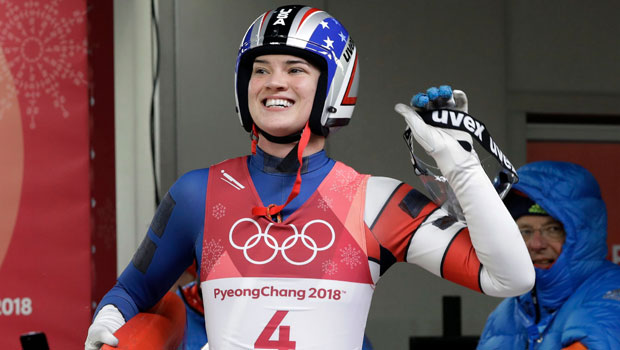 Summer Britcher: 5 Things to Know About a USA Luge Athlete Competing in the Olympics

Summer Britcher holds the record for most singles wins in USA Luge history. Here’s everything you need to know about the Winter Olympic hopeful for 2022.

Summer Britcher, 27, is preparing for the Beijing Winter Olympics in 2022. She was the first member of the squad to qualify for the USA luge singles team in 2022. Emily Sweeney, Britney Ardnt, and Ashley Farquharson are among her other women’s singles partners. Erin Hamlin, a former teammate, and 2014 Olympic gold champion announced her retirement following the 2018 Olympics.

Summer is ecstatic to be competing in the Winter Olympics, and her opinion about her rooming predicament went viral on TikTok. In Tokyo, the Summer 2021 Olympic athletes slept on cardboard beds. This time, however, such is not the case because the mattresses may be adjusted with remotes for maximum comfort.

«Not only are there no cardboard beds here, but it’s as if the Beijing organizing committee thought, ‘How can we completely one up Tokyo?'» She remarked this as she strutted around the room, displaying the opulent bed. Here’s all you need to know about Summer and her prospects of winning gold now that she’s rested.

1. Summer has participated in the Olympics on two occasions

Summer has previously competed in the Olympics on two occasions. She joined the US luge squad for the first time at the 2014 Winter Olympics in Sochi. She then went on to compete in the Pyeongchang 2018 Winter Olympics. Despite the fact that she didn’t place in each event, the professional athlete maintains a positive attitude.

«Didn’t I make a lot of sacrifices to reach to that point?» I missed out on so many key events with friends and family, always justifying my actions with the excuse that «I need to do everything to be so good at the Olympics.» She told Glenn Clark Radio on Jan. 6 that she «got there and failed.» «I was walking away and thought to myself, ‘Wow.’ I’ve never won an Olympic medal. I’m sitting here, and I’ve given up everything for what?’ And that’s solely due to the fact that I approached it incorrectly.»

2. Summer suffered a major injury several months before the 2022 Olympics

Summer’s chance to compete in the 2022 Winter Olympics was almost jeopardized when she injured her left hand’s middle finger. During the Sigulda World Cup, the incident occurred during a crash. Despite the fact that she reported her injury exactly four weeks before the Olympics, she intends to compete. «I’ll still be participating in Beijing, and with such a strong crew behind me, I’m convinced that I’ll be recovered enough to pull and paddle my way to some fast start times in the Olympics,» she posted on Instagram, putting up her middle finger.

Summer has won five World Cup Championships, proving that she is a true luge champion. Her victories occurred in the years 2015, 2016, 2019, 2020, and 2021. With three consecutive victories, she is in a strong position to win gold at the 2022 Olympics, despite the fact that she has yet to win there. With her five victories, she became the leader of the all-time single in USA Luge history.

Summer did not win any medals in the Winter Olympics during her two appearances, but she did win gold at the Youth Olympics in 2012 when she was only 17 years old. She was a gold medalist in the team relay event. She has also been crowned National Champion after competing in the Norton USA Luge Championships twice and winning their junior championship in 2013.

5. Summer’s passion for luge began at a young age.

Summer developed her love of luge when she was 11 years old and her family visited Liberty Mountain Resort in Fairfield, Pennsylvania. Summer remarked on Glenn Clark Radio, «It was a lot of fun, but I guess I was just this little jerk — that’s how I think of it now, looking back.»

«I was about 11 years old at the time, and all I wanted to do was beat my elder brothers.» I was being so competitive, which now makes me think, ‘Wow, that was probably just incredibly annoying trying to beat them.’

She sped down the hill so quickly that the attendants advised her to try luge. «One of the USA Luge employees there approached my parents and said, ‘Hey, I think your daughter has some potential.’ «You should send her up to Lake Placid, New York, where we have a real luge track and she can try out for the squad,» she suggested.