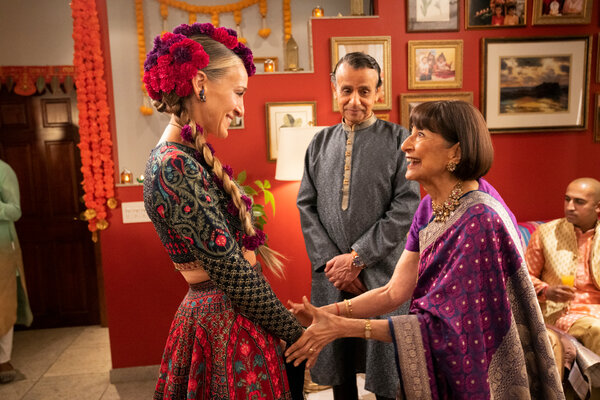 The sixth episode of «And Just Like That,» the reboot of «Sex and the City,» received a lot of attention from the South Asian community when it aired earlier this month. The episode, which was named after the Hindu festival Diwali, exploited the festival as a story factor and sparked outrage over a sari-gate faux pas.

In one scene, Sarah Jessica Parker’s Carrie Bradshaw and Indian-British actress Sarita Choudhury’s Seema Patel, a real estate broker, is seen shopping for clothing for a Diwali celebration at what Ms. Bradshaw refers to as a «sari shop.»

Many viewers pointed out after the episode aired that the store was stocked with Indian apparel other than the sari and that Ms. Bradshaw eventually purchased a lehenga, a three-piece garment worn at Indian weddings and celebrations.

Ms. Patel and her mother are seen later in the episode wearing saris, which are made up of an uncut piece of cloth wrapped around the body and draped over a shoulder, as well as matching blouses. However, the storyline fails to distinguish between their saris and Ms. Bradshaw’s lehenga, which upset several viewers who were otherwise elated to see Indian culture and fashion given such prominent placement on a major television show.

Imran Amed, the founder, and CEO of Business of Fashion stated in an Instagram post the day after the show aired, «I think it’s really fantastic» that Ms. Bradshaw chose to wear Indian attire to the Diwali party. Mr. Amed, who lives in London, said, «The issue is that there are now millions of people out there who think what Carrie is wearing is a sari.» «It isn’t.»

What really is in a name? Hundreds of years of cultural history in this situation.

The lehenga (or ghagra) is more prevalent in northern India and is thought to have gained popularity during the Mughal reign over India in the 16th century.

«The lehenga set is typically made up of three elements: the voluminous floor-length skirt known as the lehenga; the blouse or choli, which is often worn as a crop top; and a dupatta or stole-like drape,» said Divyak D’Souza, a Mumbai-based stylist and host of the Indian edition of the reality TV show «Say Yes To The Dress.»

Ms. Bradshaw wore a burgundy skirt and midnight-blue top outfit from Falguni Shane Peacock’s spring-summer 2020 collection, which was developed by husband-and-wife designers Falguni Peacock and Shane Peacock. The extravagant costume, which was created in the designers’ Mumbai workshop, contains colorful embroidery and gold thread embellishments on a jacquard fabric, as well as a matching tulle net dupatta, which Ms. Bradshaw does not wear in the episode.

«The designs on the lehenga comprise architectural domes, inspired by the palaces of Udaipur, Rajasthan,» said Ms. Peacock, whose brand is famous among diaspora celebrities, with lehengas previously worn by Priyanka Chopra Jonas and Mindy Kaling for Diwali festivities in 2021. Mr. Peacock went on to say that he and his wife wear their lehengas nearly like dresses, which appeals to a younger population.

The sari, on the other hand, is a much older garment. The drape, according to K.H. Radharaman, creative director of Advaya, a brand noted for its technological breakthroughs in the sari has a long history. «With origins dating back to the Indus Valley culture, the sari is one of the oldest surviving clothing in human history.»

Mr. Radharaman, who lives in Bengaluru, stated, «The nature of our ceremonies has changed, but the sari has remained constant.» «It symbolizes centuries of intellectual continuity, connecting us to our past and traditions.»

Saris, he explained, are combined with a stitched blouse and are predominantly worn by women, though some males wear them as well. Mr. Radharaman explained, «The generally described technique of wearing one is to wrap it around the waist down in concentric pleats, with the extended part — the pallu or tailpiece — slung over the left shoulder.» Wearing a sari with a fitted jacket, crisp white shirt, or even a cape is a more modern way to outfit it.

The sari is a material that takes on the form of a person in its purest form, which means there are as many ways to drape it as there are communities in India.

Mr. Radharaman explained, «Every region has its own sari and visual design vocabulary, with themes and techniques whose genealogy and origin are entrenched in history or mythology.» «It is extremely symbolic of both the wearer’s and the maker’s culture, therefore conveying different cultural sensibilities in a way that few clothes can.»

Is one more popular or suited for specific times than the other between it and the lehenga? It’s difficult to generalize in a country as culturally diverse as India, but both have been part of Indians’ collective sartorial lexicon for generations (alongside other garments like anarkalis, kurtas, and shararas to name a few). Every group has its own rules about what silhouette or drape to wear for celebrations, while Mr. D’Souza says the lehenga is frequently chosen when an event requires more formal attire.

He explained, «The sari is typical clothing for many Indian ladies, even for everyday wear.» «In comparison, the lehenga is worn more for festive occasions like weddings, and can be seen on both the bride and the guests.»

Mr. D’Souza added that the «colors and surface embellishments of a lehenga are often tied to the bride’s cultural background,» noting that not every version is spice-colored or heavy on glitter and floral designs. «The silhouette has changed dramatically.» Many designers are experimenting with traditional weaves, current updating, and modern styling in a modernist style.» 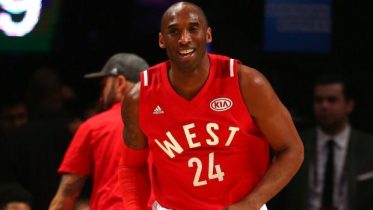 Moving forward, the NBA All-Star Game MVP will be awarded a new trophy. The NBA presented «The Kobe Bryant Trophy» on Thursday, which will be…