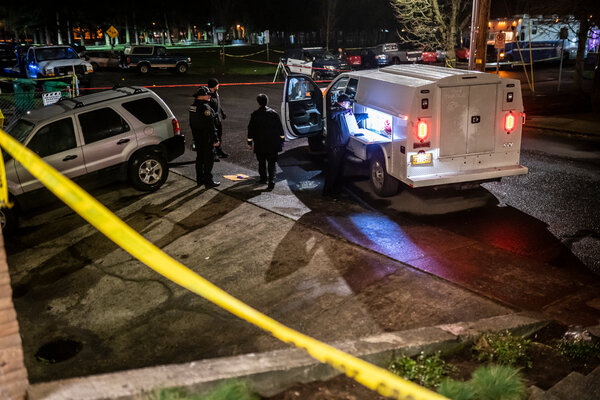 One person was killed and five others were injured in a shooting at a rally against police shootings in Portland over the weekend, reigniting tensions among the city’s social justice campaigners.

When officers got to the scene in the Rose City Park area on Saturday night, a woman was deceased, according to the Portland Police Bureau. According to the police, two men and three other women were taken to a local hospital.

According to Lt. Nathan Sheppard, the gunshot, which occurred at the commencement of a protest, seemed to be «a conflict between armed protestors and an armed homeowner.» «The preliminary investigation points in that direction.»

He refused to reveal how many individuals were hospitalized or whether anyone was being held in jail.

According to the police, the crime scene was «very chaotic,» and «a number of witnesses were uncooperative with responding officers.» The majority of those who were present left without speaking with officers.»

Dajah Beck, who will turn 39 on Monday and was contacted through her attorney, claimed she was shot twice. One bullet grazed her knee, while the other went through her side.

Ms. Beck stated that she was a member of a volunteer motorcade organization that was putting together a safety plan and rerouting traffic in advance of the march. «We’re not protesting,» she clarified, adding that no one in the convoy was armed.

A man approached a small group of women, screaming that they were «violent terrorists» and repeatedly calling them a misogynist slur, as Ms. Beck and the group worked, with one woman riding in the back of a truck because she walked slower and with the use of a cane.

According to Beck, the man said they were the perpetrators of the city’s violence and threatened them, saying, «If I see you come past my house, I’ll shoot you.»

Several members of the group attempted to calm him down. «That’s when he started shooting,» Ms. Beck remarked, as she turned her gaze away from him toward one of her companions. After being shot, she collapsed to the ground and crawled for refuge under a truck tire.

«The first thing I noticed was my two pals on the ground covered in blood,» she added moments later. The woman who died was one of them. The shooter had been restrained at that point, according to Ms. Beck, and people were on top of him.

On Sunday, the city’s uneasy mood persisted. A news conference regarding the incident was almost immediately disrupted by a group of protesters, one of whom decried white nationalism.

Mayor Ted Wheeler asked the community to participate in the investigation in a statement on Twitter late Sunday night.

«While many circumstances surrounding last night’s shooting in Normandale Park remain unknown, we do know one thing for certain: our community is mourning another terrible act of gun violence,» he said.

The incident occurred near a park in Portland that has been the site of several protests against police shootings in recent years. Several shots, according to neighbors, were fired.

«I was sitting in the room conversing with my wife when you hear numerous gunshots,» said Jeff Pry, a local resident.

According to fliers distributed online before the event, protesters planned to gather around 7 p.m. and begin marching at about 8 p.m. local time from the area surrounding Normandale Park.

Requests for a reaction from many campaigners went unanswered. Some activist groups advised demonstrators to keep their firsthand experiences on social media to a minimum, whether via photo or text.

Protesters have been gathering in Portland for years to protest police homicides, some even before George Floyd was killed by a Minneapolis cop in 2020.

Letha Winston, whose son Patrick Kimmons was fatally shot by police officers responding to an altercation in Portland in 2018, was a part of the march on Saturday night. The use of lethal force was found to be justified by a grand jury. Ms. Winston has participated in racial justice marches on a weekly basis.

According to social media posts, the demonstration on Saturday was in response to the death of Amir Locke, 22, who was fatally shot by police in Minneapolis early on Feb. 2 while they were carrying out a search warrant. The assassination of Mr. Locke, a Black man, sparked outrage in Portland.

Mr. Locke was not the objective of the police raid, which was carried out under a «no-knock» warrant, which does not require homeowners to be notified. The use of such warrants has now been halted in Minneapolis.

Organizers demanded «Justice for Amir Locke» and «Justice for Patrick Kimmons,» as well as others engaged in police killings, in a graphic used to advertise the demonstration on social media.

Demonstrations for racial justice in Portland have occasionally devolved into violence between protesters and counterprotesters, but initial reports indicated that there were no counterprotesters there on Saturday night.

While the police in Portland have been chastised for overreacting to protests — the force was used more than 6,000 times during protests in 2020, prompting a Department of Justice reprimand — the constant clashes, particularly those that have devolved into vandalism, have irritated many Portland residents, including the mayor.

Political violence, he noted in the statement, harms social movements that seek a more inclusive society, regardless of where it comes from. «There’s simply no more room for political violence in the Portland we’re working to construct, whether it’s police brutality, paramilitaries, vigilantes, or misdirected activities in support of police reform,» he said.