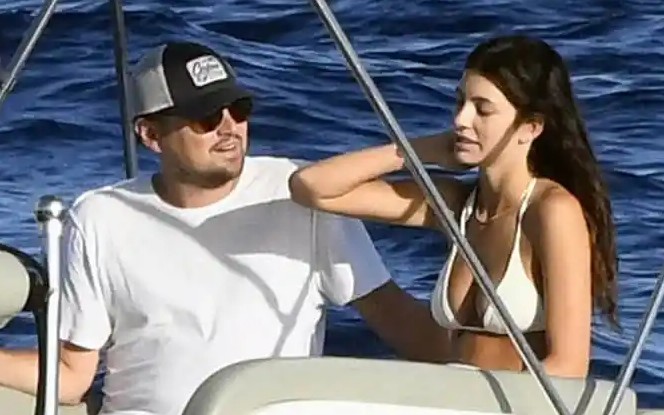 Leonardo DiCaprio flaunts his dad physique and engages in PDA with Camila Morrone, his 24-year-old bikini-clad lover. St. Barts is a small island off the coast of the Caribbean.

Leonardo DiCaprio proudly flaunted his dad bod while sucking his face with Camila Morrone, his much younger and fitter girlfriend.

During a trip to St. Barts with the 24-year-old, the 47-year-old Academy Award winner exuded confidence, pulling his shirt off and jumping into the ocean. While Camila pushed upon him from behind, the shirtless Wolf Of Wall Street actor laughed wide, exposing his hairy chest.

Leo, who has a net worth of $260 million, spun around after dunking his head in the water and placed a large sloppy kiss on her. The legendary Playboy hardly came up for air while making out with his lover, proving that zeros in your bank account matter more than a gym membership.

Camila, who is Al Pacino’s stepdaughter, made beachgoers do a double-take as she flaunted her bikini body in front of everyone. Leo’s girlfriend, who is 23 years his junior, wore an itty bitty eye-catching bikini that looked like it came straight out of a Sports Illustrated ad.

Camila wasn’t just attracting attention from the front as she let her curves pour out of her push-up bra top. Nearby photographers got the money shot while running on the sandy beach.

Leo’s girlfriend of several years showed off her perky rear in a lacy black thong, barely covering her behind in cloth so thin it should be illegal.

Camila confirmed that the Don’t Look Up star wasn’t the only one pleased to be on vacation by slapping a smile on her face. According to Radar, the pair rang in the new year by chartering Swiss billionaire Ernesto Bertarelli’s $150 million superyacht Vava II.

Check out the photographs here!

Leo has been linked to Camila for four years, despite his reputation for exclusively dating hot, young models. The couple first made their relationship public in February 2018, when they attended Ellen DeGeneres’ birthday party together, marking their first public appearance as a couple.

Leo has also grown close to Camila’s renowned stepfather, Al Pacino, and has been seen with him when she isn’t around.