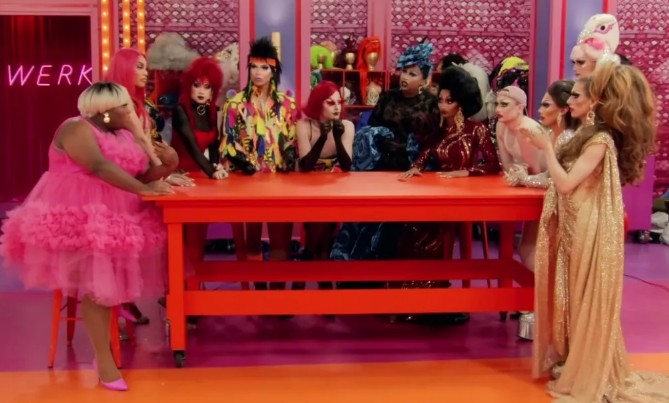 Fans of RuPaul’s Drag Race, welcome! We’ve met the 14 queens vying for the title of America’s Next Drag Superstar, and this week, they finally shared the runway for a fashion-filled runway. Ru also throws in some surprises and a plot twist. Who has the ability to dazzle and who has the ability to fizzle? Continue reading to find out.

Alicia Keys enters behind the mirror, All Stars 2 style, saying «Look over there» (apparently without knowing the origin of that classic line), and the first seven queens arrive, marking the first time the queens come face-to-face.

The next day, our 12 queens meet for the first time in the workroom, and RuPaul greets them with her first surprise of the episode: Orion Story and Daya Betty have returned for a second chance at the crown (which I am ecstatic about). June Jambalaya, on the other hand, was less enthusiastic, calling the new development «straight-up nonsense.»

If that wasn’t enough, Ru summons the Pit Crew, who arrives with a plate laden with RuPaul candy bars. This season, Ru Wonka tells the queens that she’ll leave anything to the «drag gods.» Each queen chooses a bar, which will now follow them throughout the competition. One bar offers a «golden ticket» – the queen who fails the lip sync will survive to slay another day if she has it. What a turn of events!

Unfortunately, our first quick drag mini-challenge of the season will have to wait at least a week because the dolls have a lot on their plates this week. Ru likes a pair of balls, so this year’s ball challenge will have double the fashion and double the excitement, with the two sets of queens competing with not one, but two balls.

There are three styles per queen at each event, for a total of 42 looks this week. The «Hide ‘n’ Chic Ball» is hosting the first group of queens. Their first outfit is vacation wear with zebra print, and their second look is evening attire with leopard print.

They must build (from scratch) animal print wedding eleganza for their ultimate look. The «Red, White, and Blue Ball» is being brought to the runway by our second set of queens. The first is «red hot resort,» while the second is «why does it have to be white?» Last but not least, a fantasy of a made-from-scratch (and patriotic) wedding gown.

I won’t go over all 42 looks (you’re welcome), but here are some of the most popular. Bosco’s «apres-ski on Mars zebra print fantasy,» June’s «zebra wealthy bitch,» and Kornbread’s canteen purse were standouts in resort attire at the Hide ‘n’ Chic dance.

Ru, Michelle, Carson, and guest judge Christine Chiu (I have) were all over-caffeinated after an over-caffeinated Ru. Willow Pill (I have no idea who she is, but she is lovely) wins a well-deserved triumph, with Angeria and Jorgeous both receiving good ratings from the judges. June Jambalaya (again) and Maddy Morphosis are in the bottom two, leaving Alyssa, Bosco, Kerri, Kornbread, Daya, Deja, Jasmine, and Lady Camden unharmed.

«I Love It» by Kylie Minogue is lip-synced by the two. During her performance, June takes off the majority of her clothing (and reveals her wig), with the discarded fabric almost tripping Maddy up a few times. June’s awful striptease (oh, and she took off her shoes, which we all know is an LSFYL no-no) may have lost her the opportunity to sashay away, as Ru declared her the queen. But wait…the there’s candy bar…which doesn’t require a ticket. As a result, June Jambalaya is the season’s first recognized queen to be ousted.

The apparent MVP this week is Willow Pill, the challenge winner (although, to Ru’s credit, she only said «she’s not a large pill» once during the episode), but there were so many other queens who had their moments this week that I’d rather give them honors. You guys, Daya Betty ate a dragonfly. Of course, she did it for a $1K paycheck from Kornbread, who can’t stop calling her «Diabetica» (and, in case you’re curious, it tasted like grass). She also noted Maddy’s bewilderment when trying to obtain her candy bar (as did we all) and joked, «It’s a straight thing.»

«Kornbread, she looks like a fun time, but lady, Miss Thing got on a Mary J. Blige wig,» Angeria said when she saw Kornbread’s short bob. By strutting in and yelling «Catch,» Bosco wins the finest workroom entrance of the week.

June’s revelation that «the only craft I appreciate is mac ‘n’ cheese» made me snort-laugh, as did Kerri and Angeria’s conversation about my girl crush actress, Sharon Stone, with Angieria wondering, «Who’s Sharon Stone?» «Some well-known white lady?» (There was a brief pause as her inquiry made me feel a million years old.) Deja also referred to her breasts as «boobsicles,» which made me smile.

The queens provided us with some nice moments in addition to laughs. «Do I look like I sew?» Jasmine asked as she assisted Kerri. Kornbread kindly got Willow a cup of hot water to hold onto to comfort her cold fingers while Colby was out with her dress (a result of her medical condition.) Kornbread had a breakdown as Kerri recalled her parents disowning her after she came out as trans.

Orion shared that her drag was a tribute to her mother who passed away after a struggle with mental health issues, and Kornbread had a breakdown as Kerri recalled her parents disowning her after she came out as trans. Even though it’s only week three, I’m already in love with all of these queens.

That concludes episode three. Next week, we’ll have our first acting task, and J-Lo will be making her Drag Race debut. Until then, keep in mind that if you can’t love yourself, how can you possibly love someone else? Is there an «amen»?

Be the first to comment on "Who is the MVP of RuPaul’s Drag Race Season 14 Episode 3?" 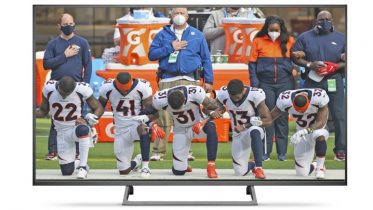 Remember how many people said they’d never watch the NFL again after Black players taking a knee? They lied, according to the data. Fans took…