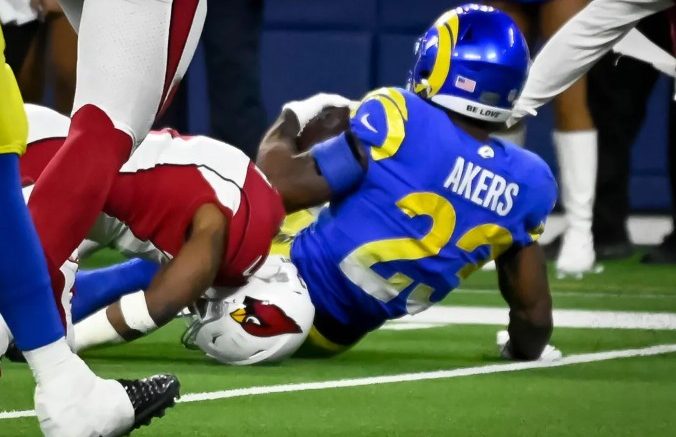 Rams head coach Sean McVay drew up a stretch play to the left side on 2nd and short late in the third quarter of last night’s Wild Card contest between Arizona and Los Angeles. Running back Cam Akers reached the first down line without being touched after left tackle Joe Noteboom sealed the edge.

Budda Baker, a two-time All-Pro safety, met him as he turned upfield and headed inside the Cardinals’ 10-yard line, flinging himself at Akers and saving a touchdown. Isn’t that a great takedown?

Baker lay still on the turf for several minutes. Baker was wheeled out of the stadium on a stretcher in an ambulance, and while we were told immediately after that he had movement and sensation in all of his limbs, it was still a terrifying scene for those watching. A review of the incident revealed that Baker had suffered a concussion as a result of a head-to-head collision with Akers.

Head-to-head collisions that result in catastrophic injury are a typical occurrence in the NFL, and every time one occurs, the «rugby» story is tossed around. «How come, despite the lack of protection, these types of injuries practically never occur in rugby?»

Despite research indicate that rugby injuries are more common than football injuries, the data is more closer than you’d anticipate for a sport in which players repeatedly collide with one another while wearing no pads.

Nonetheless, everyone believes that rugby tackling is far safer than football tackling. In the past, some NFL clubs have attempted to teach their players appropriate tackling form by emphasizing rugby-style form. When Baker went on Pat McAfee’s show a year ago, he effectively confessed that rugby players conduct better, safer tackles.

That’s why I’m surprised Baker would make a tackle like the one we saw last night on Akers. It demonstrates how deeply ingrained incorrect tackling technique has become in the minds of some football players. They were taught a specific manner to tackle from the time they first started playing the sport at a young age.

They were raised in this manner, received scholarships for playing in this manner, and were effectively rewarded at times for continuing to engage in these risky behaviors. While it’s encouraging to see NFL coaches and even some college coaches embrace the safety benefits of rugby-style tackling, it should be taught at a younger age. It should, in fact, be the first lesson taught in youth football programs.

Rugby-style tackling emphasizes not only tackling with the shoulder, but also tackling behind the runner, as YouTube football commentator Brett Kollmann explained in an earlier pinned tweet. This method of tackling avoids head-on collisions and, even if the offensive player does not drop their head prior to impact, it still prevents head injuries from colliding with a player’s thighs.

We’ve all seen how big NFL players’ quadriceps can get. When not as harmful as helmet-to-helmet collision, ramming your head into those while the athlete is sprinting full speed can still cause catastrophic injury.

In a rugby match, someone who attempted to tackle an opponent player like Baker did last night would be instantly benched. In rugby, proper form and safety are so ubiquitous and frequently stressed that it’s a shame football doesn’t follow suit.

The Seahawks’ concussion numbers dropped dramatically the following year after head coach Pete Carroll began emphasizing shoulder tackling in 2014. In football, there is a definite link between this style of tackling and the severity of concussions.

So, if you’re considering enrolling your child in football for the upcoming Pop Warner season, watching rugby might be the best way to keep them safe. Additionally, ensuring that the instructors teach the children this method of tackling will likely prevent future injuries.

While this strategy won’t completely eliminate concussions in football, it’s reasonable to say that we, as fans, would want to see a world with as few moments like Baker’s last night as possible. Encouragement of youth football organizations to prioritize teaching rugby-style tackling would go a long way toward making that scenario a reality. 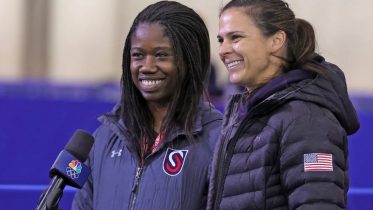 The world’s top-ranked woman in 500-meter speed skating will represent the United States in the Olympics. Erin Jackson, 29, made history in 2018 when she…