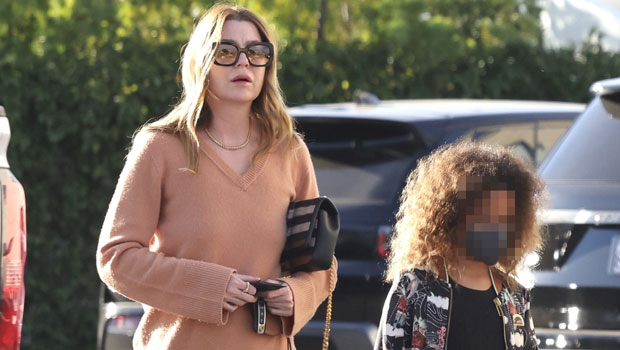 As she prepares to film the 19th season of her blockbuster medical drama, the 52-year-old ‘Grey’s Anatomy’ star went shopping with one of her three lovely children.

Ellen Pompeo demonstrated once again that she is an adoring mother by treating her youngest daughter Sienna, 7, to a day of shopping and dining. On Friday, the Grey’s Anatomy star, 53, was seen out and about with her lovely daughter in the posh Larchmont Village district of Los Angeles (January 29).

The couple was beaming as they took advantage of the beautiful, bright weather, which was ideal for some shopping therapy!

Ellen wore a taupe V-neck sweater, black slacks, and designer boots in a casual elegant combination. Her typical sandy blonde strands were let loose and cascaded over her shoulders, with a part down the center.

She wore a simple chain necklace and carried a little leather purse, and her perfect face was framed by a pair of sunglasses. Sienna looked adorable in a black sundress and a graphic jacket.

Ellen’s 12-year-old daughter Stella and five-year-old son Eli Christopher were absent from the festivities. Chris Ivery, her record producer husband, with whom she has been married since 2007, is the father of her three children.

The performance in Los Angeles comes on the heels of the announcement that Grey’s Anatomy would be renewed for a historic 19th season. The Shonda Rhimes show was renewed by ABC on January 10th, continuing its reign as the longest-running primetime medical drama series.

THR stated at the time that Ellen had signed a new agreement to continue playing Dr. Meredith Grey, in which she received «another compensation hike and remains broadcast television’s highest-earning actress in a primetime drama series.»

Ellen, who has been on the show since its inception in 2005, was hesitant about returning for another season before signing on the dotted line, and she even recently spoke on the show’s demise. In an interview released on Saturday, December 18, the actress said, «I’ve been trying to focus on convincing everybody that it should end.» «I feel like I’m the naive one who keeps asking, ‘But what’s the story, what’s the story we’re going to tell?'»