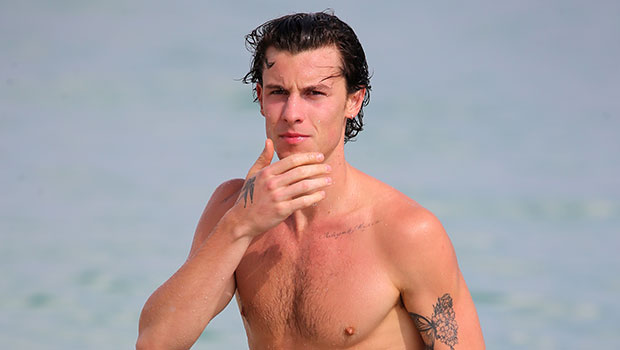 One day after reuniting with Camila Cabello, Shawn Mendes flaunts his chiselled abs on the beach.

On Friday, Shawn Mendes flaunted his sculpted figure in Miami, a day after he was pictured with ex Camila Cabello.

Hello and welcome to Miami!

Shawn Mendes has been looking hotter than ever while hanging out in Miami, Florida, where he was snapped in nothing but black swim trunks soaking in the sun and catching some waves on Friday, Jan. 7.

The musician was photographed hanging out with his crew and flaunted his toned abs, arms, and legs, even smiling at the camera as he had a dip in the ocean and enjoyed the warm weather. The «Treat You Better» singer has been enjoying all that Miami has to offer, flaunting his muscular physique earlier this week. The sultry beach photos of the «Mercy» singer, 23, come just one day after he was seen walking his Golden Retriever, Tarzan, with ex Camila Cabello, 24, nearly two months after the two announced their breakup.

Shawn wore light blue pants and a white t-shirt, while Camila appeared to be wearing a light-coloured sundress. It was unclear whether the two returned solely to co-parent their puppy or if they were considering rekindling their romance. Camila was not photographed on the beach with Shawn.

On Nov. 17, the two-year-old pair published a joint message on their individual Instagram Stories announcing their breakup, assuring fans that their «love for one another» was still «stronger than ever.»

«We’ve decided to stop our romantic relationship,» the note stated, «but our love for one another as humans is stronger than ever.» «We started our relationship as best friends, and we’ll keep it that way. We have been grateful for your support from the beginning and will continue to do so in the future.»

Shawn and Camila first declared their relationship in the summer of 2019, despite the fact that they’d known each other since 2015. After collaborating on the sultry 2019 hit «Seorita,» the musicians generated rumours about their relationship.

They acknowledged their connection not long after the release, prompting many to wonder whether their relationship was genuine or just a publicity gimmick. Shawn quickly put an end to the rumours, telling journalists at LAX that their meeting was «absolutely not a PR hoax.»

Be the first to comment on "One day after reuniting with Camila Cabello, Shawn Mendes flaunts his…"