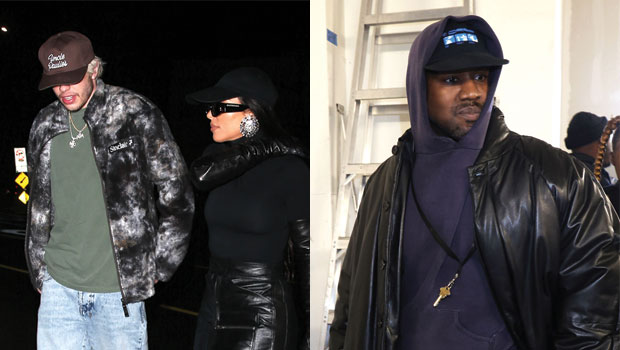 Kanye West claims that because Pete Davidson was present, Kim Kardashian’s security wouldn’t let him into her home.

When he was purportedly stopped, Kanye West claimed that his oldest daughter North had begged him to come into Kim Kardashian’s home.

Kanye West, 44, now claims he was unable to enter his separated wife Kim Kardashian’s 41-year-old home. The confrontation occurred, according to the Yeezy designer, because Kim’s «new boyfriend,» Pete Davidson, 28, was inside the mansion.

«On Monday, when I went to pick up my kids from school, the security guards stopped me at the gate. «At that moment, security was between me and my children, and that’s not going to happen,» Kanye told Entertainment Tonight’s Hollywood Unlocked presenter Jason Lee.

North West, his 8-year-old daughter, requested her father to come into the house to show him something at that point. «However, I didn’t want to get into a fight about it.» So I just relaxed, drove my kids to school, and then drove them home,» Kanye continued.

«I’m behind the wheel.» When I returned with them, North said, «I want you to come upstairs and see something.» ‘Oh, Daddy can’t come see things,’ it’s like. Daddy is unable to enter.’ «However, that had not been specified,» he noted, saying that he had not been told of the new restrictions.

Pete was on the property because he was visiting his new girlfriend Kim from New York City. «I was asked to come inside by my daughter.

«I was like, ‘I’m the richest Black man and North’s father,’ and security was able to stop me from coming into the room with my daughter, which had not been defined,» Kanye told Jason. The Chicago native then enlisted the assistance of two female cousins to help him get through the difficult situation.

«And now I’m hearing that the new boyfriend is staying at the place where I’m not allowed to go.» And it’s from there that I call my cousins. And you know how opinionated my cousins are. And I told him, ‘I need you to go say these two things,'» he added, adding that he isn’t happy with North’s TikTok presence (she recently started an account with her mom called kimanddnorth). «Security isn’t going to stand in the way of me and my kids, and my kids aren’t going to be on TikTok without my consent.»

Kim and Pete have been dating since Oct. 9, when they met on the set of Saturday Night Live. Kanye was in the audience to support the founder of SKIMS, who filed for divorce from him in February 2021. Since then, the rapper has moved on from Julia Fox.

Be the first to comment on "Kanye West claims that because Pete Davidson was present, Kim Kardashian…"