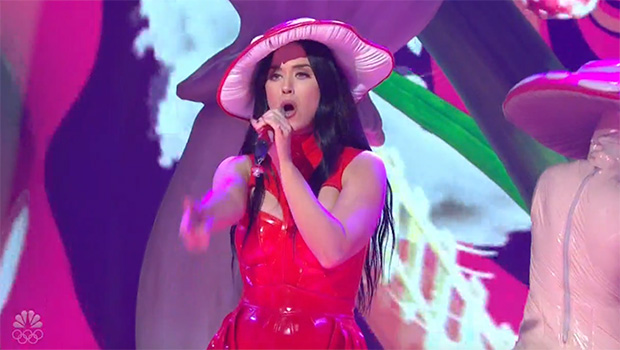 Katy Perry made her fifth performance on Saturday Night Live on January 29th, where she sang ‘When I’m Gone’ with a massive stage set-up.

When it comes to appearing on Saturday Night Live, Katy Perry is a seasoned veteran! The 37-year-old pop sensation brought her A-Game to the stage for an epic premiere performance of her collaboration with Alesso, «When I’m Gone.»

For the performance on Saturday, Jan. 29, the Santa Barbara native wore a skintight red latex bodysuit with fringe chaps made of the same material. «You think you’re going on/But it won’t be for long, you’ll see/When I’m gone I’m never truly gone,» she sang on stage over the infectious tune.

She played on a massive stage reminiscent of the Super Mario Bros. video games, complete with dancing mushrooms (a key element in the game). Behind Katy, a giant screen with a shifting colorful background wrapped around both sides, completely encompassing the typical Studio 8H stage.

The «Firework» singer’s SNL visit coincides with the launch of her new Las Vegas residency, «Play,» at Resorts World on December 29. The first leg ended on January 15, but she will return on March 2nd for the second series of events, followed by two more legs due to high demand.

The show, which has been dubbed «camp,» takes inspiration from films from the 1980s and 1990s such as Pee-Big wee’s Adventure and Honey, I Shrunk the Kids.

«In Las Vegas, I’ve put together a one-of-a-kind show.» It’s the craziest, most entertaining, and amusing show I’ve ever put together… «I’m giving it my all,» Katy stated in an interview with Interview magazine about her latest live show, which contains songs from her new album Smile as well as music from all of her prior efforts.

«I’m 37 years old and have been doing my thing for over 12 years, and people continue to show up and love me. I don’t take anything for granted, and I’m grateful for that. I wake up every day knowing that even if I’m not feeling 100%, I still have to give it my all. «I brush it off and put on a show for them,» she added.

In promotion of her career-defining album Teenage Dream, Katy made her first performance on NBC’s sketch comedy series in 2010, performing both the title song and «California Gurls.» She went on to host the show in 2011 and sing «Roar» and «Walking On Air» in 2013. Katy was last seen in 2017 for her controversial song «Swish Swish,» which many mistook for a diss song directed at Taylor Swift (the two have since reconciled, and Katy was included in Taylor’s video for «You Need To Calm Down»).