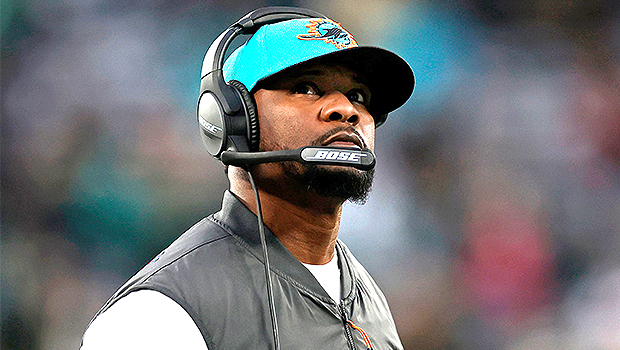 Coach Brian Flores is suing the NFL for discrimination. Here are five things you should know about him.

The former head coach of the Miami Dolphins filed a complaint against the NFL and three teams, alleging discrimination during the hiring process.

On Tuesday, February 1, Brian Flores, 40, filed a lawsuit against the NFL, the Miami Dolphins, the Denver Broncos, and the New York Giants.

In new legal docs filed in federal court in Manhattan, the former Dolphins head coach claimed that he was a victim of racial discrimination throughout the hiring process during his tenure. The following are five facts you should know about Brian and his lawsuit.

1. Brian claimed that he was fired unfairly by the Dolphins.

From 2019 through 2021, Brian was the head coach of the Miami Dolphins. According to ESPN, he said that Dolphins owner Stephen Ross gave him an extra $100,000 for each game his team lost in order to assist him to earn a better draft position. As the club began to win, Stephen became enraged that the team would not receive the draft pick he desired.

Brian declined the owner’s invitation to a lunch meeting on his boat where he could have an impromptu talk with a quarterback, and he left. He was treated as «someone who was noncompliant and difficult to work with,» according to the lawsuit.

The lawsuit claims that under Brian’s coaching, the Dolphins had two consecutive winning seasons and that he was fired before his five-year contract was up due to «poor teamwork,» with «discriminatory undertones,» according to the lawsuit.

2. He invoked the Rooney Rule and chastised teams for racist behavior.

Brian had set up an interview with the Giants for a head coaching post when the lawsuit was filed. Brian had an interview scheduled with the New York team in January 2022, according to the complaint, and he’d texted New England Patriots Head Coach Bill Belichick about the position.

Brian had been told by the Patriots coach that he was «their guy,» but subsequently learned that he had misinterpreted a text and that Brian Daboll was being appointed as the next head coach.

The Rooney Rule, an NFL guideline that requires teams to interview at least one minority candidate for open head coaching vacancies, was the focus of the complaint. According to the lawsuit, «Mr. Flores was deceitfully led to believe that he genuinely had a chance at this [Giants head coaching] job.

» The lawsuit contends that, despite its «good intentions,» the Rooney Rule is «not working,» as evidenced by the gap in the number of Black players against Black coaches and coordinators.

3. He is attempting to persuade the NFL to appoint more African-American coaches.

Brian wants the NFL to change its policies as a result of the case, in addition to the money. He demanded that Black members of the organizations have more «sway» over choices to select and remove persons in positions of leadership, such as head coaches and general managers.

4. Prior to joining the Miami Dolphins, he served as an assistant coach with the New England Patriots.

Brian was associated with the Patriots as early as 2004 before obtaining the head coaching position with the Dolphins. He began his career as a scouting assistant before becoming a special teams assistant for the coaching staff in 2008.

He was a safeties coach with the Pats from 2012 to 2015, and then a linebackers coach from 2016 to 2018, before taking over as head coach of the Dolphins. He was a member of the Patriots for four Super Bowl victories.

5. He was a college football player.

Brian was a linebacker at Boston College from 1999 to 2003 before becoming a notable NFL coach, according to ESPN.

He was the team’s second-leading tackler, and if it hadn’t been for a ruptured quadriceps muscle that ended his playing career, he would have gone on to play in the NFL, but he was able to land a position with the Patriots.

Kate Bosworth, 39, Channels the Iconic Film «Blue Crush» in a Bikini 20 Years Later. Kate Bosworth illustrated what life was like at 39 by…