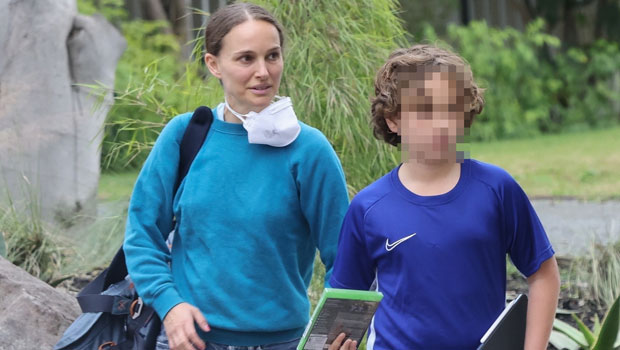 Aleph, Natalie Portman’s 10-year-old son, flaunts his curly hair as he is picked up from a friend’s house.

Natalie Portman and her cute look-alike son Aleph wore matching casual clothing and smiled as they walked outside together.

During her most recent outing with her son Aleph, Natalie Portman, 40, appeared to be a proud mother. The actress was seen walking with the 10-year-old after picking him up from a friend’s house earlier this week, and the two appeared to be having a pleasant conversation.

Natalie donned a backpack and her mini-me a video game, and they both wore casual attire incomparable colors.

During the day out, the Anywhere But Here star wore a teal sweatshirt, blue trousers, pink Nike sneakers, and a white face mask. Aleph Millepied, whose father is Benjamin Millepied, wore a dark blue T-shirt, light teal shorts, and black sneakers with his long wavy hair. Natalie flashed a wide grin at one point, indicating that she was having a good time.

Natalie and Benjamin have a four-year-old daughter, Amalia, with whom they share a home. Despite their efforts to keep their family life as discreet as possible, the lovebirds have been spotted enjoying fun together at numerous locations, including Disneyland. The family made news in 2019 after walking around «the happiest place on Earth» as a family.

Natalie is busy with her successful acting profession when she is not spending time with her husband and children. After the release of her book Natalie Portman’s Fables, which she can be seen clutching in the photo above, she’s also become a well-known New York Times bestselling author. The book, which was launched in October 2020, is a retelling of three classic fables.

In an Instagram post promoting the book, Natalie wrote, «These fables hold many of the virtues I aim to impart in my kids: empathy, attentiveness, thinking, and true friendship.» «I’m looking forward to hearing how your kids react as well!»

Thor: Love and Thunder, Natalie’s next highly anticipated film, will be released in July. The award-winning actress co-stars opposite Chris Hemsworth, Christian Bale, and Chris Pratt in the film as Jane Foster / Mighty Thor.

Be the first to comment on "Aleph, Natalie Portman’s 10-year-old son, flaunts his curly hair as he is…" 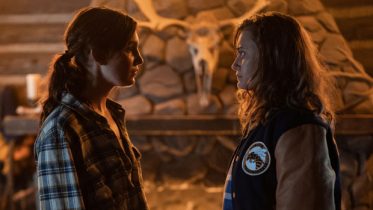 Sophie Nélisse, star of ‘Yellowjackets,’ delves into the ‘Painful’ Death in the Finale and Shauna’s ‘Guilt.’ ‘Yellowjackets’ ended its first season with a tragic and…