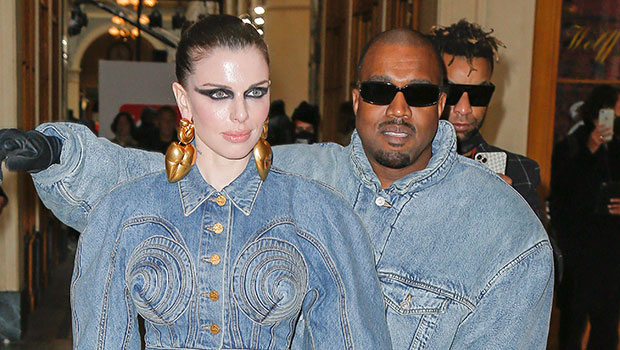 Kanye West and Julia Fox Debut On The Red Carpet At Paris Fashion Week In Denim.

Kanye West and Julia Fox wore baggy and fashionable denim jackets and jeans to the Kenzo Paris Fashion Week show this past weekend and posed for spectacular photos.

On Sunday, Kanye West, 44, and Julia Fox, 31, made their red carpet debut as a pair. When the rapper and actress visited the Kenzo Paris Fashion Week event in the city of love, Paris, France, they wore similar all-denim ensembles. They smiled for the cameras as they posed for shots together, holding one other close and displaying confident facial expressions.

Kanye wore a big denim jacket and jeans that matched. Julia wore her own denim jacket with a midriff peeking through, which he completed with black boots, black gloves, and sunglasses. She completed the style with matching baggy trousers and denim heels, as well as huge gold-colored dangling earrings.

The brunette beauty boldly stood by the «Jesus Walks» crooner’s side, holding a black pocketbook and sporting a dramatic makeup look that included black eyeshadow and eyeliner around her eyes. As they paused in front of a giant «KENZO PARIS» sign to pose for headline-making images, all eyes were on the new couple.

Kanye and Julia’s latest outing follows their Saturday embrace in Miami, FL, before jetting out to Paris for one of the year’s most important fashion events. Julia also made headlines last week when she spoke out about the backlash she was receiving as a result of her relationship with Kanye.

Julia noted on the Jan. 21 episode of her podcast Forbidden Fruits, «It’s strange because I’m receiving all of this attention, but I honestly couldn’t care less.» «People say, ‘Oh, you’re just in it for the celebrity, the clout, the money,’ and I say, ‘Oh, you’re only in it for the fame, the clout, the money.’ Let’s keep things real, honey, I’ve dated billionaires my entire adult life.»

Kanye and Julia met on New Year’s Eve about a month ago and have appeared to be inseparable since then. They’ve been open about their PDA and posting photos and videos of each other on social media, so it’s only natural that they’d walk the red carpet together this weekend. We’re excited to see more of their blossoming romance in the future!