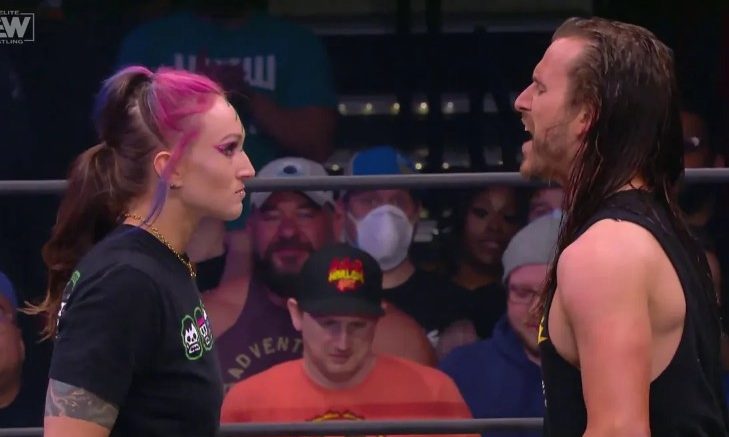 A photo of Kris Statlander and Adam Cole from last week’s Dynamite has sparked a lot of discussion on Twitter recently. It’s led to a number of people asking for something basic, something perfectly doable, but something the company has never considered:

Last night, AEW hosted a mixed tag match, pitting Cole and his real-life girlfriend Britt Baker against the Best Friends faction’s Orange Cassidy and Statlander. And the match went off without a hitch. It had some fantastic moments, as well as a few occasions where they teased going full-on intergender tag match rather than the mixed kind.

The mixed tag rules, however, always caused too much interference, as one tag required both teams to swap members, and the frequent «would the male wrestle the other side’s woman?» teases were a little too much.

And it didn’t help the women in this specific match at all. When Baker attacked her from the blindside, Statlander’s remote dances with Cole only made her appear like a mug. Britt was treated as if she had fallen off a 10-story building into a greenhouse and into a pool of badgers when she took a through-the-table spot, which was as clean and easy as one of them could be. This drove Cole to go completely insane, smack Cassidy in the balls for bumping Britt off the apron by accident, and win the bout. Cassidy, too, seems apprehensive.

Britt Baker, on the other hand, began her rise to the top of the organization with a lights-out bout with Thunder Rosa in which she bled excessively, was suplexed onto a bed of thumbtacks, and then took a table spot from the top rope. She turned it into a T-shirt!

How can suddenly casting her as the damsel in distress, after such a little setback in comparison to what we’ve seen her do before, advance her character? Why does she have to be «vengeance» by a psychotic boyfriend?

It’s wrestling, and Britt can fight her own battles (granted, part of Cole’s character is that he’s insane, and part of Baker’s role is that as a heel, she rarely fights her own battles, preferring to throw her henchman Rebel or Jamie Hayter in the way first, but you get my point).

Why not just show Statlander vs. Cole and/or Baker vs. Cassidy, which is what the fans want to see?

We know that intergender matches are a no-no for the two major corporations since the picture of a girl wrestler getting power-bombed by a male wrestler would surely make TV executives defenestrate themselves. However, on the indie circuit, where the majority of AEW’s wrestlers come from, such pairings are far from uncommon. In reality, Statlander is no stranger to intergender matches.

It’s not like Cole and Cassidy are such massive men that we couldn’t see a lady standing a chance against them even in kayfabe. Cole is dwarfed by Statlander! Because the AEW roster is so short, there is a slew of other wrestlers who could get in the ring with anyone else on the roster and look right in terms of size. Anyone up for a game of Shida vs. Darby? Serena Deeb vs….well, who knows? Is it true that Nyla Rose can only play heavy in one division?

This isn’t a plea for the divisions to be merged outright, but it is a feature that AEW may use on occasion. If women are to be included in the company’s numerous factions, as some are, then they must be included in the factions.

They should all be involved in the feuds, run-ins, and promotions between those factions. What makes Britt Baker look better than the males if she’s in the same feud as them? Being fawned over for a simple table position, or going toe-to-toe with Cassidy and demonstrating she’s just as good as, if not better than, the wrestler?

Tony Khan, the president of AEW, has stated that he is opposed to it, therefore ruling it out. Khan, on the other hand, is incorrect in linking it to domestic abuse; intergender wrestling has nothing to do with domestic abuse. Participants voluntarily enter and are prepared for it. It’s a level playing field for everyone. It’s also a collaborative performance, obviously.

We know that TV executives would be hesitant to host such matches on their networks, knowing that the prospect would turn off viewers. Why not try it out on one of AEW’s YouTube shows, such as Dark or Elevation?

Those two could undoubtedly use a boost in popularity, considering they’re largely made up of enhancement or squash matchups between talent we don’t see much on TV. Wrestlers on the undercards would undoubtedly benefit from the increased attention provided by a Statlander-Cole match on such shows. What if such a trial run actually created some interest? Isn’t there a rating charge in the holster for television?

Yes, there is a danger. AEW, on the other hand, didn’t come this far by being risk cautious. They’ve proven that they aren’t «New York» in every manner. They do, however, have a roster full of wrestlers, both men, and women, who have spent their entire careers competing in intergender matches. They know how to present it in a professional manner. So, what’s the next danger?

Be the first to comment on "Please, AEW, give us a mixed-gender match" 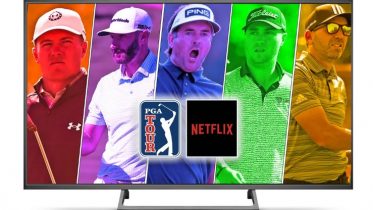 If you’ve always wanted a behind-the-scenes glimpse at the fascinating world of golf, your wait is finally over. Netflix has announced that a PGA Tour…