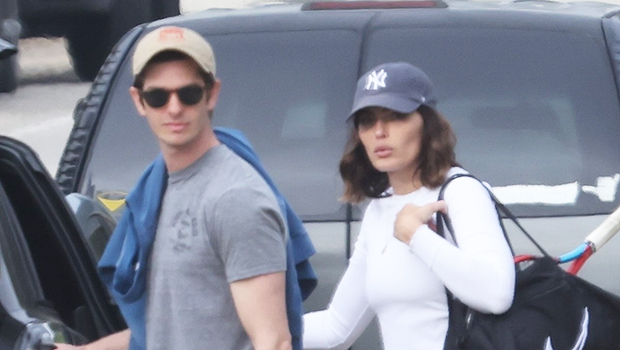 The ‘tick, tick… Boom!’ star hit the court with his girlfriend for a romantic afternoon getting their game on!

Andrew Garfield was pictured walking home from a tennis date with his girlfriend Alyssa Miller on Wednesday February 2. The 38-year-old actor and the 32-year-old model were seen headed back to their car after spending some time volleying back and forth at a Malibu tennis complex.

The couple kept their trip to the car low-key, and it seemed like they were fatigued from a day of hitting the ball back and forth.

The two were both dressed sporty for their enjoyable day out! Both donned similar Nike sneakers (black for Andrew, white for Alyssa), and rocked comfortable clothes. Andrew sported a gray t-shirt and black shorts, along with a beige cap and shades, while he held his racket and water bottle.

Alyssa donned a white long-sleeved t-shirt with a navy blue tennis skirt and a Yankees hat. The two appeared like they were attempting to get to their ride as quickly as possible.

Andrew and Alyssa have been together since approximately November 2021. The couple were first sighted while Andrew was promoting his Netflix musical tick, tick…BOOM! which he appeared in as Rent writer Jonathan Larson.

The Social Network star was caught holding hands with the model, as he walked to a taping of The Late Show With Stephen Colbert, according to People.

It’s undoubtedly been a busy few months for Andrew. After tick, tick…BOOM! was released in November, the actor also (SPOILER ALERT) starred in the long-awaited Spider-Man: No Way Home, which came out in December.

After lots of fans wondered over whether Andrew (or Tobey Maguire) would make their return as Peter Parker, the older Spider-Men made their triumphant return to the SpiderVerse. Andrew even humorously maintained the secret from his ex-girlfriend and Spider-Man co-star Emma Stone, who played Gwen Stacy in The Amazing Spider-Man.

“Emma [Stone] kept on contacting me. She was like, ‘are you in this new Spider-Man film?’” he claimed, during an interview with the Happy Sad Confused podcast. “And I was like, ‘I don’t know what you’re talking about.’ ”