Every time Britney Spears brings up her ex-boyfriend Justin Timberlake, our hearts skip a beat. This time was no exception.

On September 23, Britney Spears released the ideal throwback photographs, but it was her Instagram caption that drew our attention.

Britney began her caption with, “Geez… this is me before my VMAs performance with [Mick Jagger] 20 years ago!!!!” after sharing a series of photos of herself sitting next to the rock legend at the 2001 MTV Video Music Awards, just moments before she took to the stage and performed with a giant python around her neck.

The singer went on to say that the outfit she was wearing that night was one of her favorites because it was “basic black lace.” She also revealed that she was “feeling sorta out of body with jitters” before performing “I’m A Slave For You” on stage because she would soon be “in a cage with a live lion!!!!!”

She continued, “I will never forget the moment before I got into the cage,” in her post, which you can read below. “When Justin [Timberlake] noticed I couldn’t speak, he took my hand in his and gave me a five-minute pep talk, which obviously worked!!!!! Pssss. 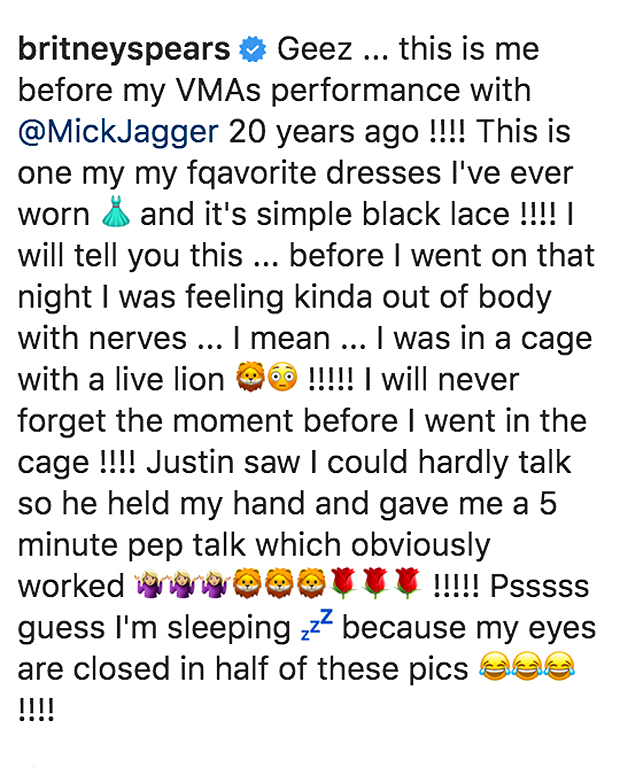 But it’s Britney’s mention of Justin that we adore in this latest Instagram picture. When she thinks about their past and the good times they had together, she clearly beams. And she’s been mentioning him a lot lately.

She not only uploaded an old photo of herself with him in April, but she also danced to his music in a January video. Our hearts are pitter-pattering, as we already stated.

On a lunch date with her mother, Kim Zolciak, Brielle Biermann wears a crop…

In a cute video, Mark Wahlberg lets his 11-year-old daughter paint his nails